Although my parents had baby names for me that they used at times--for example, "cookie" and "pussycat," these never morphed into appropriate adult nick names. For instance, no one in my house ever called me Jan. That would have been the most common and appropriate nickname for "Janice," but no one ever came up with it. Was it a severe lack of creativity? I don't think so. In hindsight it said more about parenting style than it did about their opinion of me. My parents ran a rather strict household. We laughed but it was either behind the parents' backs or at a time when my father decreed a joke or anecdote was funny. My point is that we weren't a casual family who twirled nicknames and sweet talk like they were batons and we were in a parade.

I never fully articulated it, but I would have given up a lot of adolescent revelry to get a nickname. I was a teenager and everything revolved around me. So why didn't I have a nickname? It had to be because of something that I did, didn't do, or lacked. That's how teens think, you know. I took its absence as another indication that my parents and by extension my friends did not have tender thoughts of me.

There was nothing under my parents' exterior except a critical layer followed by another critical layer. They figured I was nothing but a poor excuse for a top college wannabe freshman. They were wrong. The only reason I applied to top schools was lack of confidence and the need to be validated by the academic and admissions process.

When it came time for senior class pictures for the high school yearbook (and the ridiculous errata that usually goes under the photo), I felt so unsure about myself that it was necessary to come up with a nickname even though my good friends would know it was bogus. There was that entry on the questionnaire that asked if I had a nickname. I felt that if I didn't have one, it was tantamount to being a nerd (only back then it wasn't a nerd, it was a fink, a teacher's pet or a drudge). So I used the name "Jan." I hated it then and I still hate it. No one has ever called me that, and I think that's because I'm not the friendly, fun-loving, extrovert that this nickname is associated with.

Of course there are worse things than struggling through life without a punchy nickname. What about all the kids who got stuck with names like "Sissy," "Maxie," "Jo-Jo," or "Daffy"? Better to have no nickname than a stupid or subtly derogative one.

What's your nickname? Who gave it to you? Comment on this please. 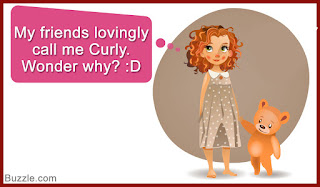 patricia said…
Haha - when people ask me for my nickname, I tell them it's Patricia. Never had/wanted one, and woe to anyone who calls me Pat.
October 9, 2019 at 3:00 PM