Shopping for a Shrink (in an ideal world)

January 17, 2019
You need help. Fast. You have been told by friends, relatives and even your boy/girl friend that you could use some therapy. Even strangers on the street are giving you the hairy eye.. Some of your acquaintances bluntly suggest a shrink; others say you need to confront your demons; still others suggest that you find a sympathetic relative to cosy up to and relay your woes.

You give in to the majority. If everyone on the planet, it would seem, thinks you'd be better off seeing a shrink, then by crackee, you'll get the best one  that money and a sad story can buy, taking into consideration his/her pay scale, location, gender, and psychotherapeutic techniques. Nah. Those things don't really count. Just get someone who doesn't laugh in your face or fall asleep.

The truth is you want the very best for the very least, and everyone understands that. You're not making a six-figure salary yet and ramen is getting expensive. But while shopping for a shrink (in a perfect world) can be loaded with lots of dead ends, it's really not difficult if you keep a list of criteria in mind. Some criteria are politically correct or make incredible sense .and you are willing to share them with the entire world, but others are subconscious and you'd have to do top-notch detective work to uncover their source. So we'll skip those criteria and go with the following Shopper's Guide to Hiring a Shrink

1. First off, google the shit-hell out of him or her. Find out if he's written anything, graduated college, has a doctoral or medical degree, has taken part in any FBI or police shoot-outs, speaks English, has a website, participates in any social media, and likes dogs. You may not like dogs, but if your shrink doesn't like them, that's a bad sign. It indicates a low tolerance for spontaneity and a definite no to any physical contact whatsoever between doctor and patient. I mean if he/she won't even pet a dog on the head, he/she sure isn't going to put a sympathetic arm around your shoulders. (One shrink I had insisted he kept a dog and even put a dog bed in his office, but I never saw the little pooch so either he was lying or he had bought an invisible dog and was in worse shape than me. I think it was the latter.)

2. Go to a few wine bars around town and casually mention the need for someone to talk to about your problems. Ignore the drinkers who recommend someone they went to school with--this never works out. You end up hearing about such and such a psychologist who thought she'd experiment during her internship and ended up imposing phobias right and left. Most patients developed an elevator phobia.  Luckily this same psychologist has a first-floor office so that's not a problem if you happen to have an elevator phobia and want to see this psychologist (which I don't recommend).

.3. When interviewing shrinks, watch out for those who are extremists--they talk too much or too little, spray saliva to emphasize points, expect you to understand their spastic hand movements, take off their shoes, need to walk around the room instead of staying put in a chair, ask you your name every 15 minutes, make appointments six months in advance, talk to their boy/girl friends on speaker phone, and continue to ask you if you smell something funny, like gas leaks, farts, daffodil flowers or a bunch of bananas.

5. In general, choose a gender shrink opposite. Who says you can't daydream about you and your therapist getting it on? These ruminations also help to sublimate aggressive thoughts you may entertain about killing your boss, sending your current boyfriend a five-foot alligator, and counting the seconds you have to stand in line at Starbucks until you hear the barista say, "And what holiday latte would you like today?" Opposite gender shrinks never cancel appointments because they usually need the money very badly.

6. Age, religion and attractive qualities are of no consequence in terms of selection criteria. On the other hand, a messy desk and a blotter with doodlings on it is a sure sign that your shrink has his mind on other things while supposedly listening to you. A good test of his attention capabilities is to tell him a story about a work conflict and then throw in a non sequitur. For example "I pushed Louise away at the copier so I could make my deadline and then she began to knit." If your shrink doesn't wrinkle his brow or ask you to repeat the statement, he or she has failed the test. Shop further until you get a shrink willing to listen to your mundane garbage about work, dating and relationships.

If these criteria do not work for you, then you are probably more dysfunctional than you realize.  Write to the National Institute for Mental Illness and tell them you are ready to jump off the Golden  Gate Bridge, but you can't remember where it is. That usually gets a quick response from your government.

But sorry, I forgot. Your government is in budget shutdown mode so I'm not sure these questions will receive rapid replies. I don't think suicide qualifies as an emergency, according to Congressional hearsay. In that case, dial the Suicide Hotline in your hometown and ask them for someone who speaks five languages. This usually creates a brouhaha among the volunteers with the result being they will connect you with the Chief Shrink. After you tell your impassioned tale of depressive nights and self-destructive actions, ask him/her to recommend a GOOD SHRINK. Good luck!! 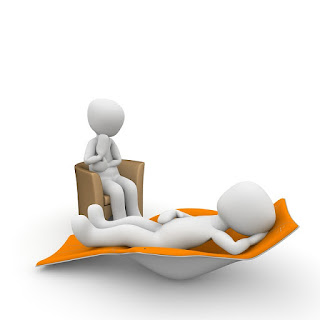