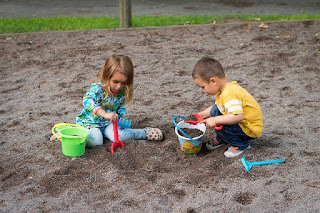 So Pelosi and Trump are in this smallish sandbox. They each have their pail and shovel --Trump's shovel is bigger and redder, but we won't hold it against him--and are having a wonderful time making sand castles and knocking them over. As little children are wont to do, they indulge in parallel play, which means they don't interact with each other.

But one day their grey matter has an unusual growth spurt and their pattern is broken when Donald decides to build a wall of sand around the perimeter of the sandbox. He needs to involve Nancy since the wall will invade her territory. Nancy is pissed off--she doesn't know if she can continue making sand castles if Donald is busy positioning this wall. Donald seems to have taken over the sandbox, leaving Nancy no room to play. It's at this point that the two decide to talk to one another.

Nancy: Why do you need to build such a big wall?

Donald: Because I'm protecting all the good people from the barbarians.

Nancy: What is a barbarian anyway?

Donald: That's someone who would come intro the sandbox and kick sand in everyone's face.

Nancy: Well, isn't there another way we could stop the barbarians?

Donald: I don't think so. I've talked this over with the kids on the swings and they tell me that the barbarians don't even speak English. So how could we talk to them?

Nancy: We could pantomine a solution. Act it out. You're good at that--I've watched you. Show them that a giant wall around the sandbox would be boring. It wouldn't allow them to come in and do other things besides kick sand-- like play with toy tractors and cars and maybe bury a kid. I really enjoy seeing people introduce new play ideas into the sandbox. Don't you?

Donald: No, because I worry that after the barbarians kick sand in everyone's faces, they will fill their buckets with more sand and then run around the playground throwing sand at everyone in the entire playground--kids and parents alike. Even the dogs could get a mouthful.

Donald: I'm not sure. I've got one size bucket and you have another size, so that means if you help out, the wall will be uneven and that won't keep out the barbarians.

Nancy: Well, what if we all get the same size buckets? Then can we help?

Donald: I don't think that'll work out because now that I look at the sandbox, I'm not sure there's enough sand to make a wall. Maybe I need to contact the playground management and have them deliver a few more tons of sand.

Nancy: That sounds like a pain in the ass. Why don't you just chuck that idea and come up with a better plan?

Donald: And what would that be, Nancy?

Nancy: Maybe we could recruit a few parents to stand by the sandbox and keep the barbarians away. Wouldn't that work?

Donald: It might, but we'd probably have to ask the parents nicely and make sure none of their kids were barbarians. Sometimes it's hard to tell the barbarians from the kids who are dressed nicely in Izod designer togs and Nikes.

Nancy: This is getting too complicated, and I have yet to see a barbarian come close to the sandbox.

Donald: That's because they know if I say there will be a wall, I mean it.

Nancy: So as long as you're here, the barbarians won't come? I think we just solved the problem. Why don't you stay here and yell at the barbarians so I can protect my sand castles. How does that sound?

Donald: I'll take it under advisement and get back to you. Meanwhile I think we need to vacate the sandbox. Yes, a playground shutdown is the way to go. Then when kids can't use the swings, the slide, or the balance beam, they'll take the barbarians more seriously. Plus I'll get respect.

Nancy: You may get respect, Donald, but you'll get some other four-letter feedback you won't like.

Donald: You think so? In that case, I'll just sic the barbarians on them! Won't that be fun!

Nancy: I'm beginning to feel sorry for the barbarians.

민아 said…
The sports lottery in Korea is called Sportstoto(스포츠토토), and these websites are called as safety playground(안전놀이터) nickname. The Totosite(토토사이트) is many but the best site Koreans have a good expectation for this sports lottery.

Although my parents had baby names for me that they used at times--for example, "cookie" and "pussycat," these never morphed into appropriate adult nick names. For instance, no one in my house ever called me Jan. That would have been the most common and appropriate nickname for "Janice," but no one ever came up with it. Was it a severe lack of creativity? I don't think so. In hindsight it said more about parenting style than it did about their opinion of me. My parents ran a rather strict household. We laughed but it was either behind the parents' backs or at a time when my father decreed a joke or anecdote was funny. My point is that…
1 comment
Read more

Should Old Acquaintances Be Forgot?

December 27, 2018
In the Scottish dialect of the old New Year's Eve song Auld Lang Syne, the composer posits the question: Should old acquaintances be forgot?

The short answer to this is "Sometimes."

One example will suffice. A "friend" of mine emailed me the other day and although she is not a writer, her words spoke plenty. Her first rebuke was that I don't answer her calls, and this is a claim I cannot deny. But the accusation was caustic, mean-spirited--it was as if I had neglected to visit her in the hospital, that's how grievous my omission was. She insinuated so much by those few harsh words.

Why did she call? Purportedly to inform me of her physical status and that of her dog Murph. Being the obedient child I still am, I did call her afterwards, and we spoke. Mostly S spoke of her new illness--osteoarthritis of the spine--and her dog's possible diagnosis of valley fever. I listened and listened and listened until I just couldn't take it any more. There we…
4 comments
Read more

2. I resolve to use the electric toothbrush and water flosser everyday or un…
2 comments
Read more